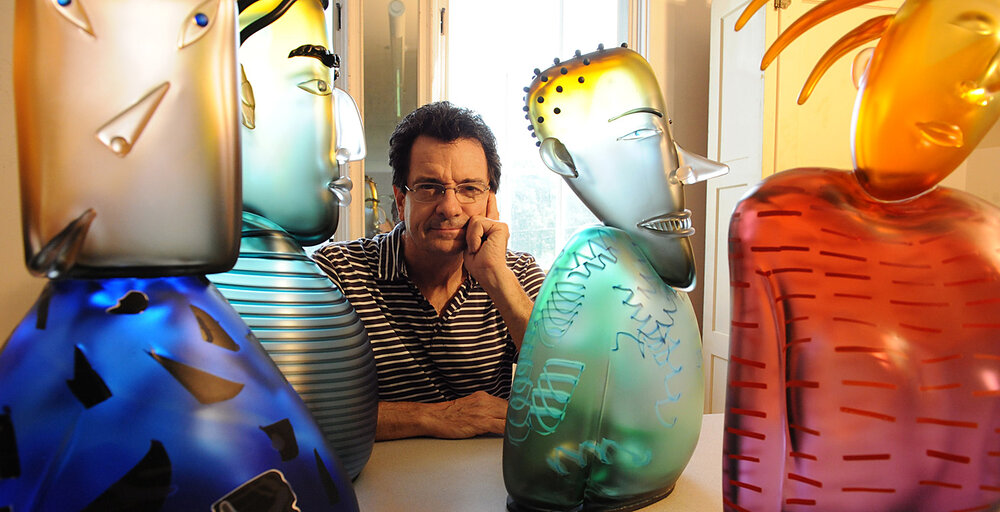 Dan Dailey sculpture. His legacy has spanned over 40 years. He first had an appreciation for the medium, while helping construct a ceramic and glass studio at the Philadelphia College of Art, with Roland Jahn who was a teacher there. Dailey went on to become Dale Chihuly’s first graduate student at the Rhode Island School of Design. He became a product of the studio glass movement, which was initiated by Harvey Littleton in the 1960’s. Dailey set himself apart by having a modernism approach, and depicting human characters in his sculptures.

While learning at an artistic residency in 1972 on the island of Murano, Dan was able to study at the Venini Glass Factory. There he learned how to utilize industrial concepts, and create brass sculptural lamps & blown glass. This experience became a template for how Dailey would later create industrial pieces.

Upon returning to the States, he founded the Glass Department in Boston in1973. This set into motion countless lectures and teachings at Pilchuck Glass School, MIT,  The Rhode Island School of Design, and the Haystack Mountain School of crafts.  Dan Dailey has been recognized in over 100 exhibitions globally, and has produced over 70 architectural sculptures and commissions.