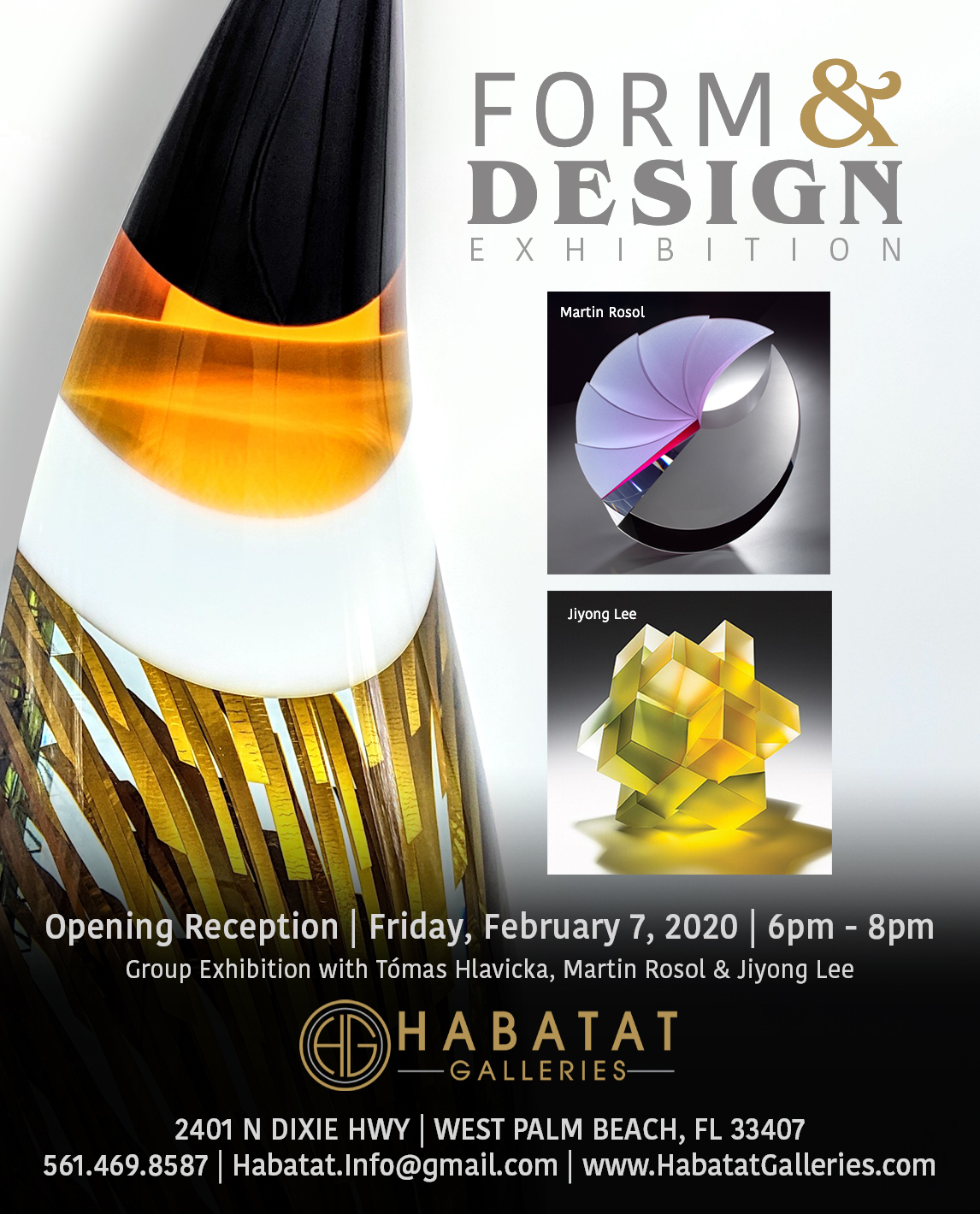 Tomás Hlavicka was born in Prague in 1950 and earned a degree in architecture. The beginning of a career shift occurred in 1976 when he began working with his father-in-law, Pavel Hlava (a founder of the Czech School of Glass). This experience exposed Tomáś to many areas of glass technology including cutting and polishing. Architecture remained his main focus until 1990 when he began working closely with Pavel Hlava and by 1997 was creating his own body of work. The first exhibition of Tomas Hlavicka’s work was held at Habatat Galleries in Florida during the same year. He has pioneered the exploration of fusing sheets of silver and gold foils between layers of glass. The resulting sculptures create mesmerizing visual effects of space and movement as colors intertwine, light shifts or ones point of view changes.

Martin Rosol came to the United States in 1988 to pursue his career as a sculptor and like many Czech glassworkers, learned his trade in a company school set up to train craftsmen to execute limited edition designs for art glass manufacturers. Though the arrangement provided employment for many, it did not provide young artists with the degree required by the old regime to sell art. So Rosol, who had been designing and making sculptures while working in a glass factory, shipped his work out of the country. Before long, Martin Rosol’s sculptures were being exhibited in Europe and United States, and in 1981 he was awarded the Bavarian State Prize for Glass Sculpture in Munich. In 1986 he left Czechoslovakia for Austria and two years later came to the United States.

All of Rosol’s sculptures are made with several pieces precisely cut from blocks of crystal and constructed in architectural form after selected surfaces have been sandblasted. The range of translucence and the varied reflective surfaces, the clarity of crystal, and the icy gloss of sand-textured glass all create enclosed spaces within the polished structures. With their architectural forms designed to receive and contain illumination, they are indeed monuments to the light.

Jiyong Lee is a studio artist and educator who lives and works in Carbondale, Illinois. A professor of art at Southern Illinois University, Lee has headed the glass program there since 2005. Lee was born and raised in South Korea. He earned his MFA from the Rochester Institute of Technology in New York and taught there for several years. As an instructor, he also has taught at the Pilchuck Glass School, the Studio of the Corning Museum of Glass, Penland School of Crafts, the Pittsburgh Glass Center, the Domaine de Boisbuchet in France, Canberra Glassworks in Australia, Fire Station Artists’ Studios in Dublin, Ireland, and various other art institutions and universities nationally and internationally. Lee has served as a member of the board of directors for the Glass Art Society from 2009 till 2015. He has won a number of honors, including Bavarian State Prize from International Trade Fair, Munich Germany, the Emerging Artist Award from the Glass Art Society. His work was featured in American Craft Magazine, New Glass Review of Corning Museum of Glass, and American Art Collector. His work has been exhibited and collected nationally and internationally and recent highlights include KOREA NOW exhibition at the Musée des Arts Décoratifs, Paris, an acquisition by the Barry Art Museum, Corning  Museum of Glass, and Chanel France.